The Paragon of Animals

Now here is an interesting little tidbit from back in the stone ages, 1990, that I missed completely. It came out during my reclusive nerd phase and I would’ve snatched it up in a blur had I known of its existence. The Monty Python Video Game (the first of several such games) was developed by Core Design, the same people who created Tomb Raider, and released by Virgin Games for the Commodore 64, Amiga, and ZX Spectrum systems.

The game play is pretty straightforward. It is a basic side scroller done in the style of the cartoons from the show, yet despite the standard style it is different and Pythonesque. You play as the Gumby characters negotiating around various weird obstacles and throwing fish (or sometimes shooting) fish at the weird creatures trying to stamp on him, drop 16 ton weights on his head, or whatever. All of the scenery and villains are, of course, straight from the series.

Randomly the game will switch gears and a bizarre non-sequitur mini-game or a scene from the show, or will even fake tell you the game is over. The character will go through random alterations after each level- swapping bodies into a fish form, a bird body, or a giant hopping leg- then tossing you into a different style of level. It is fun and obnoxious at the same time, and has a mean difficulty curve. 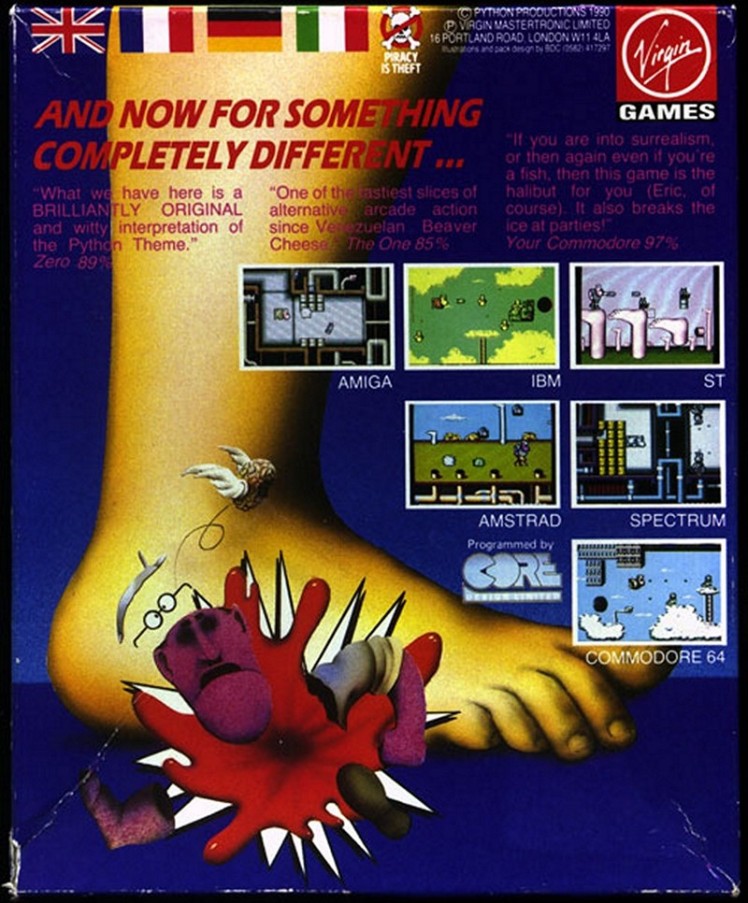 Honestly, I’ve always hated these types of games and this one quickly reminded me why I stopped playing side scrollers the minute I discovered something else. I believe I was really obsessed with The Bard’s Tale when this game came out, which is probably how I missed it. The game is fun for about five to ten minutes, then becomes repetitive. I don’t know if there’s an end to it, or if it loops back on itself infinitely. It was a quick little diversion. But a fun one.

A video of the game is below. And here is a link to an emulator on Archive.org if you want to play for yourself.